I'm a blustery bastard who has been keeping busy for years as a writer and producer. I'm currently starting my own multimedia and publishing company, Trash Raiders Media, which is forthcoming in 2022.

Probably about the time I got into school. Back in the 'old days' of the late 1970s and early 1980s, people my age in the US will surely remember the Scholastic book services. In short, you brought money for a book to school in a little envelope, say $1.95 (plus the horrific 50 cents for shipping and handling!!), and about a month later you received your book. In that era, this was a nice way to engage young folks into reading and, in my case, it worked! One of the first books I ordered was "Charlotte's Web" by E.B. White, which I still believe is a wonderful and poignant story. I moved onto "The Exorcist" a few years later, so it's no wonder I'm a bit of a headcase.

Age 16--I had just moved to Las Vegas, and my entire world shifted. It was such a turbulent, prosperous area in the early 1990s, and it kind of scared the hell out of me at the time. I think writing was a way for me to retreat from the pressures of life and somehow purge a lot of the unresolved bullshit I had from my youth. My first interest was screenwriting, and I enrolled in continuing education classes at UNLV to study under writers responsible for the "MASH" television series, as well as numerous Disney projects. I still see a lot of my writing through a 'movie' filter, and I'm sure it's one of the things that influenced my first novel, "Woof", which deals with filmmaking.

As artists, we often foist certain methods of working on ourselves. We do this out of the notion that it's the 'best' for us, but most of these things don't work. If you start young, like I did, you throw everything at the wall and see what sticks. Sometimes, I still do! It's a learning experience for each one of us. For me, my effective methods, strengths, and interests eventually rose above the sludge. Hang in there and you'll ultimately find your voice, your niche, and your audience.

Stick with what you know. I have this thing I keep on my desk that reads "Tell Your Own Story". Everyone has their individual path in life and no one can take that from you. Your own experiences are almost always the best foundations for a story. It took me years to learn this, but after I started using my own life as a springboard for my work, the whole thing became much, much easier. Always remember that your writing may be the thing that gets one person (or a million!) through a tough time in their life. It might set a fire under them and be the catalyst for them finding their own strengths. That kind of shit is priceless, so don't ever give up...not just on writing, but on life itself.

My next novel, "The Loop", details my years in the blue-collar trade on the coast of Oregon. It's a funny, filthy, moving, and wonderful rollercoaster ride full of great characters. I can't wait to share it with the world. I'm on target to have it released in November 2022. After that, I'm looking at re-releasing some of my older titles, as well as moving on to lots of other fun projects. I have enough material and ideas for literally the rest of my life. The question is: which to work on next?

The support, definitely. It's been amazing to see the way writers really champion each other's work. No matter who you are or how successful you are or aren't, everyone's a fan of someone.

Buckle up because I have some ridiculously big ambitions. My ride is going to get faster, more rewarding, and lots more entertaining here in the next few years, and I want you all here with me!

I'm in the midst of doing some retooling in anticipation of "The Loop", but for now, the best places to keep up with my adventures are Twitter (@dylanthomasgood), as well as my website, www.DylanThomasGood.com. 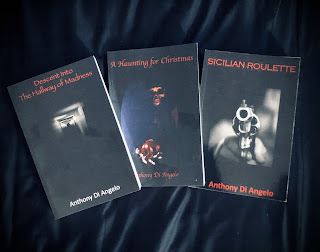 AUTHOR INTERVIEW A little introduction: My name is Anthony Di Angelo. I live in Alberta Canada. I currently am working in the oil and gas industry but am hoping to make a full time career of my writing. I have recently published three of my novels and am now working on sequels, among other projects. When did your love of books begin? I developed a love for both reading and creating stories at an early age. My favourite author as a kid in school was R.L. Stine. In high school I discovered Mario Puzo’s “The Godfather” and I was immediately hooked. I so admired his style that I hatched the idea of writing my own story to be as descriptive and captivating. When did you start to have the wish to become an author? The initial start to my journey to become an author began when a teacher of mine read one of my assigned essays. The subject was to be about an event that changed my life. I wrote about my brush with death and being diagnosed with Crohns. My essay brought her to tears and she sai
Read more

November 16, 2021
AUTHOR INTERVIEW A little introduction: I'm Alix Davenport. I'm forty-four years old and live in Copenhagen, Denmark, so that makes me fluent in certified gibberish as my native tongue. I'm fairly new on the English language writing scene, but I've been tapping away since my dad gave me a typewriter as a kid, and I've written in Danish (fiction/work related) since my early teens. After having slowly lost my eyesight, I gave up on writing, but eye lens replacement surgery in 2019 gave me back my sight and a new lease on life, including the dream to write. When did your love of books begin? Well, I think I've always read a lot and can't pinpoint when it happened. My dad worked as a journalist when I was growing up, and the magazine publisher he worked for also published novels, he brought home sample books I'd snatch and eat up in my bedroom. That newly printed book smell, I still remember. 'Fresh off the press', he used to say. When did you start
Read more